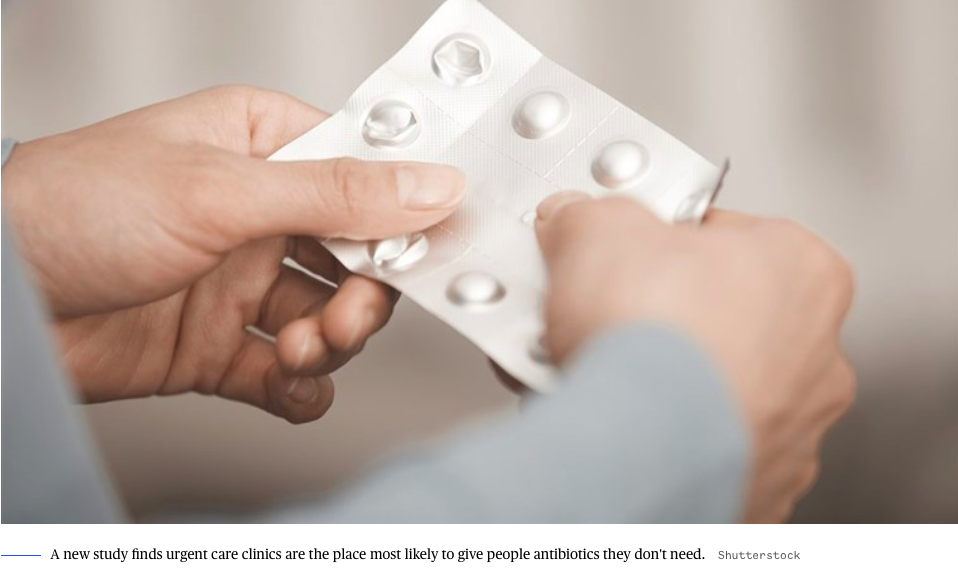 Experts say the problem is caused in part by patients who demand them when they aren't needed.

when it comes to giving people antibiotics they don’t need, researchers reported Monday.

Nearly half of people who go to walk-in clinics with symptoms of a cold or flu walk out with an antibiotic, according to a study released Monday by the Centers for Disease Control and Prevention and the Pew Charitable Trusts.

That's despite clear guidelines saying that antibiotics are useless for treating viruses such as colds or influenza.

Overuse of antibiotics is driving a rise in so-called superbugs — antibiotic-resistant bacteria that cause hard-to-treat infections.

The researchers looked at visits for respiratory diagnoses where antibiotics are unnecessary, like a cold, flu or bronchitis.

They found that for 46 percent of patients, urgent care centers prescribed antibiotics for these conditions, compared with 24 percent at emergency rooms and 17 percent at medical offices.

The findings are especially significant because the number of urgent care centers has surged in recent years, reaching 8,125 centers in 2017, up 12 percent from 2016, according to the Urgent Care Association.

A new study found that healthcare professionals in all outpatient settings often prescribed antibiotics unnecessarily for respiratory illnesses like the common cold and bronchitis, with prescribers in urgent care centers doing so nearly 46% of the time: https://t.co/KiaKfz7JK7 pic.twitter.com/CuNIaggsiW

— CDC Emerging Infections (@CDC_NCEZID) July 16, 2018
“This study was an effort on our part to understand the full landscape of overuse of antibiotics,” said the CDC's Dr. Katherine Fleming-Dutra, who worked on the study. “Every setting that prescribes antibiotics needs to identify best practices for antibiotic stewardship."

Their study, published in the Journal of the American Medical Association's JAMA Internal Medicine, compared stand-alone urgent care centers with retail clinics, which are typically found in pharmacies and grocery stores.

Only 14 percent of patients coming to retail clinics for colds, flu or bronchitis got antibiotics, the study found.

Fleming-Dutra stressed that the findings don’t mean that urgent care centers offer substandard care. The study was limited to respiratory infections, and a 2016 study looking at antibiotic use for all diagnoses found that 30 percent of medical offices and emergency rooms prescribed unnecessary antibiotics for these complaints.

Antibiotics can can also wipe out “good” bacteria in the gut that keep the body healthy in a variety of ways.

Fleming-Dutra said that doctors often write unnecessary prescriptions because they are concerned about missing something, and also to meet patient demands.

“Patients want the best care, and they may not realize that they’re making things worse with an unnecessary prescription,” Fleming-Dutra said.

She offered the following tips for patients:
Ask your medical provider if antibiotics are needed and say that you’re concerned about developing resistance.
Don’t pressure the provider to prescribe them “just in case.”
Try to avoid getting sick in the first place by washing your hands, covering your mouth when you cough, and getting appropriate vaccines.
If antibiotics are prescribed, take them as directed. Never share them with anyone else or take someone else’s pills.