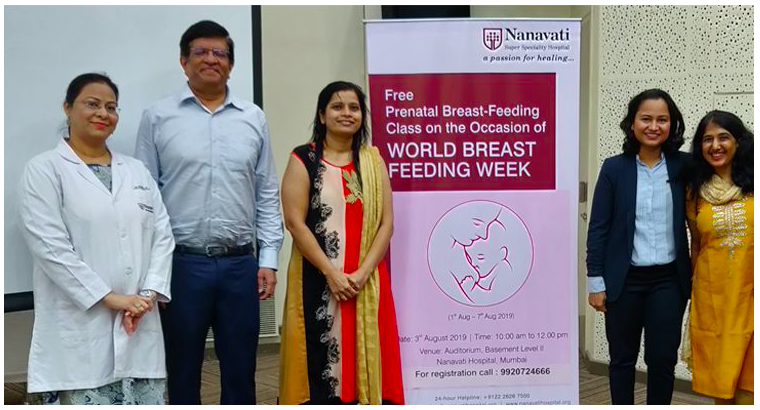 71 per cent children received their mother’s milk within ‘Golden Hour,’ of childbirth in June-July

Under the initiative, 71 per cent children born at the hospital during June-July received their mother’s milk—ideal first feed which provides lifelong immunity against diseases, boosts growth and tissue repair factors within the, ‘Golden Hour,’ of childbirth.

“We conducted an audit of our ‘Birthing unit,’ to understand constraints, bottlenecks and current beliefs or practices. The audit report findings suggested need of counselling and training for expectant mothers during antenatal period. We helped the mothers prepare physically and mentally to breastfeed their babies post-delivery and experience it as precious bonding moments with their baby,” said Dr Ashwini Jogade, Medical Superintendent, NSSH.

While the early breastfeeding rate of NSSH during January to May was about 17 per cent between June to July the rate grew to 71 per cent. All the 56 childbirths, through vaginal and caesarean deliveries were strictly followed by skin-to-skin contact of mother and child and breastfeeding initiation.

“Cases where we couldn’t initiate breastfeeding were those, where either mother or the child needed immediate medical attention and couldn’t physically be together,” said Dr Deshpande, who spearheaded the programme along with Dr Jui Shinde-Patil, Lactation Counsellor, NSSH.

Dr Deshpande added that though the hospital has been implementing BFHI, result driven implementation meant the entire, Birthing Unit, including nurses, resident doctors, gynaecologists, paediatricians and support staff of labour room and wards to work with a single objective.

“We sensitised all staff members through seminars, talks and workshops about importance of early initiation of breastfeeding and how it is lifesaving for both mother and child,” said Dr Deshpande. All the mothers, visiting hospital during their time of pregnancy, were included in antenatal counselling programmes where they were taught about importance and management of breastfeeding along with commonly faced complications and how to resolve them.

“Most importantly, we completely discouraged mothers from using any commercially available baby foods for at-least first six months. A few of our patients had twins and after counselling, despite the practical difficulties, continued to breastfeed them exclusively for six months,” said Dr Shinde. Due to the counselling by Dr Shinde, as compared to 51 per cent babies who received formula feed as their first meal during January to May, only 7 per cent babies were fed formula feed during June-July.

Even in caesarean deliveries, the team preferred to give local anaesthesia to the mothers rather than a general anaesthesia to ensure mothers are conscious post childbirth. “We created a screen to provide a private and secure space for the mothers while the doctors continued their post-childbirth surgical interventions. Nurses helped the mothers throughout the procedure and ensured the child is provided with the nutrient rich first feed,” said Dr Shinde.

Now after two months, almost every baby born at the hospital is breastfed within first 60-90 minutes of birth and spends at-least 25-30 minutes of skin-to-skin contact with their mothers. “These simple practices will lead to a lifelong immunity to babies and their mothers as breastfeeding also protects mothers from cancers of breast and cervix. It also keeps the women physically fit as there is a constant calorie consumption,” said Dr Deshpande.

The hospital is now aiming to achieve over 80 per cent rate in skin to skin contact between mother and child, early initiation of breast feeding, and exclusive breastfeeding for first six months to comply with the WHO guidelines and set a benchmark in child-mother health.