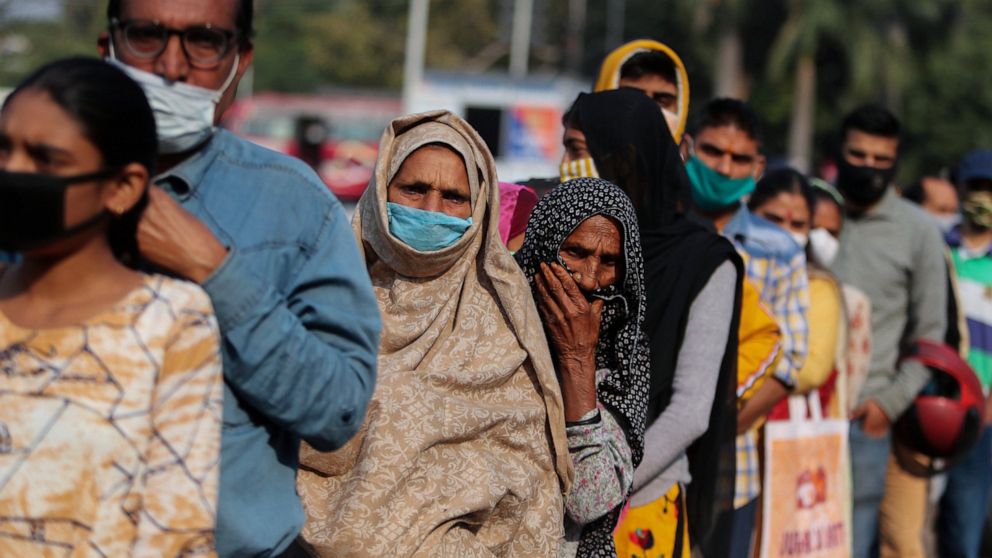 Police spokesman Ajith Rohana said 120 people have been arrested for failing to wear face masks and maintain social distancing in public places during the last 10 days. Coronavirus rules introduced last month carry a penalty of a $54 fine, six months' imprisonment or both.

“From today onwards, we will strictly enforce this law and will arrest those who defy these rules,” Rohana said.

Passenger trains resumed operating after nearly two weeks and the government lifted a curfew that had been in effect in the capital, Colombo, and its suburbs. Only pockets where infections are high will remain under isolation with no one permitted to enter or leave the area.

The government said the coronavirus threat hasn’t subsided, but the region must be opened up because the economy can’t sustain a continued closure.

Sri Lanka has counted 13,929 COVID-19 patients with 35 deaths since the pandemic began. Both figures have been increasing because of two recent clusters that account for more than 9,900 of the total infections.

In other developments in the Asia-Pacific region:

Cambodians are marking their Independence Day holiday, but new coronavirus restrictions are keeping them from celebrating at karaoke parlors, beer gardens, museums, cinemas and other entertainment venues which have been ordered shut until further notice. Students in the capital, Phnom Penh, and the satellite town of Kandal will not be returning to schools on Tuesday because they have been ordered shut for two weeks. The restrictions were issued because Hungary’s foreign minister tested positive for the coronavirus after a one-day visit to Cambodia last week. Cambodian Prime Minister Hun Sen announced Saturday that a Cambodian bodyguard for Szijjarto had tested positive. A second round of tests on Monday discovered three more infected people among more than 900 involved with the visit.

Experts on a Japanese government coronavirus taskforce urged officials and the people to step up preventive measures, testing and tracing amid a recent sharp increase in new cases, especially in the northern prefecture of Hokkaido. The panel’s “emergency recommendation” came as Hokkaido reported a record 200 new cases on Monday, many linked to Sapporo’s night entertainment district. Tokyo on Monday announced 157 new cases after reporting more than 200 on three consecutive days last week. Cases have also increased in Osaka, Hyogo, Aichi and other urban areas. The new infections have been linked not only to night entertainment areas but also to ordinary eateries, offices, schools and foreign communities, and may suddenly spike “if we wait too long without strengthening measures,” senior panel member Shigeru Omi said. “We need to take action now to prevent a sudden escalation of infections ahead of the winter so that we don’t have to restrict our social and economic activity like we did before.” Hokkaido officials raised the prefecture’s alert level to three on a scale of five, but experts said business and travel restrictions are not immediately needed. Japan as of Monday has 108,084 coronavirus cases, including 1,818 deaths, according to the health ministry.

India has reported 45,903 new coronavirus cases, with its capital recording the highest single-day rise in infections since the pandemic began. The Health Ministry on Monday also reported 490 deaths in the past 24 hours, taking total fatalities in the country to 126,611. New Delhi’s increase of 7,745 cases comes during a recent surge the government has attributed to crowding in markets during the ongoing festive season, winter weather and high air pollution. The capital’s air quality levels are plummeting to the “severe” category. A recent government report projected New Delhi may see up to 15,000 daily cases in the winter months. India has counted more than 8.5 million cases since the pandemic began, the second-highest total behind the U.S.